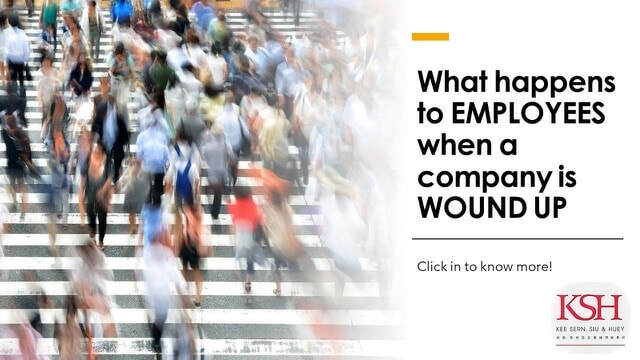 What happens to Employees when a Company is Wound Up?

The ongoing Covid-19 pandemic has caused a significant negative impact on the businesses and economy. Many companies have suffered from huge losses and their business may no longer be sustainable. It is not surprising that some of them may decide to “close shop” by reason of their liabilities (“the 1st Scenario”) or be compulsorily wound up by the court by reason of their inability to pay debts (“the 2nd Scenario”).

In both the scenarios, one or more insolvency practitioner will be appointed as the liquidator(s) to manage the affairs of the company in place of the board of directors.

The question then is whether the company’s employees are deemed dismissed?

This process is known as “voluntary winding up”. It is usually initiated voluntarily by a company where it will be able to pay its debts in full within a period of not more than 12 months after the commencement of the winding up.

Generally, the mere passing of a resolution for voluntary liquidation does not terminate the employment contracts. However, such resolution may operate as a notice of dismissal if the company says so or if the surrounding circumstances show that the company does not or is unable to continue to fulfill its obligations under the employment contracts.

In this situation, a petition is usually presented to the court for the winding up of a company by a creditor of an unsatisfied debt of more than RM10,000.00 (which amount has been increased to RM50,000.00 until 31.12.2020 as one of the measures announced by the Companies Commission of Malaysia on 10.4.2020 to reduce the burden of corporate sector during the Movement Control Order). This is known as compulsory court-ordered winding up.

It is generally accepted that a winding up order operates as an automatic notice of dismissal to all the employees of the company. Such termination takes effect by operation of law and does not amount to a dismissal without just cause or excuse.

What About Employees’ Entitlements?

When a company is wound up, it may or may not have any unencumbered assets for realization and distribution to its creditors. If there are, all unsecured debts shall be paid according to the order of priority as provided under section 527 of the Companies Act 2016 (Act 777).

Employees terminated in both the scenarios discussed above are entitled to claim the following by sending a proof of debt to the liquidator:

The amounts claimed under items 3, 4 and 5 will only be paid on pari passu principle if there is any asset available after all the preferential unsecured creditors listed under section 527 of the Companies Act 2016 (Act 777) are fully paid.

All rights reserved. The contents of this publication, current at the date of publication set out above, are for reference purposes only. They do not constitute legal advice and should not be relied upon as such. Specific legal advice about your specific circumstances should always be sought separately before taking any action based on this publication.